​
As part of Tuku 21 our Alliance Francaise Nelson Tasman is contributing a series of talks about the important influence French missionaries had on early Aotearoa.
The talk will start with an overview of the work of the French Roman Catholic missionaries and their work with establishing the Marist Māori Mission in the early 19th century. The evening will begin with the life of Suzanne Aubert and Mary Hill will tell us in details the life of Father Antoine Marie Garin.

The context of French Catholic missions is found in 1815 at the fall of Napoleon III and the restoration of the Bourbon dynasty and the revival of French Catholic evangelism.
The Society of Mary ( Marists or Marist Fathers) was founded in 1816 by Father Jean-Claude Colin in Lyon France and many of the Marist clergy went to Aotearoa to pursue Māori missionary work, particularly in the North Island.
Bishop Pompallier was instrumental in establishing a Roman Catholic congregation in Aotearoa.  Another well known personage being Sister Suzanne Aubert, known as the French woman who lived with the Māori. Sister Suzanne accompanied Bishop Pompallier on his second voyage to Aotearoa to recruit missionaries. Sister Suzanne was fluent in Te Reo and while living with Māori she learned and practiced Māori healing methods caring for women, children and the disadvantaged. Her memory is revered by many communities in Auckland, Hiruharama, Wellington, Hawkes Bay and Whanganui.
Mary Hill will discuss the connections between Bishop Pompalier, Sister Suzanne and Father Garin who all started their journey from Lyon.

​Also you will able to here Mary and Doug Hill on the 17th April as part of the radioshow "Bavardages" from 5pm.
Ticket will be available from evenfinda - email afntsecretary@gmail.com for more info. 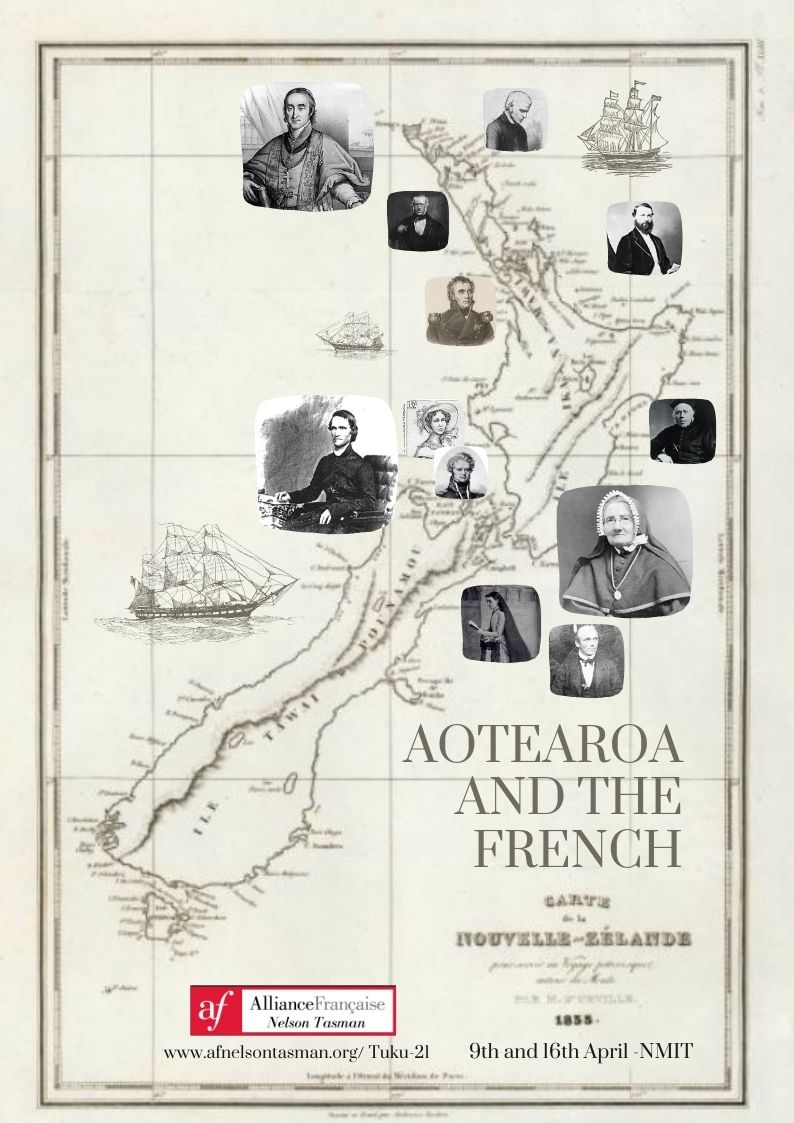 THE AOTEAROA AND THE FRENCH PART I

For our first evening , we are glad to have Doug Hill that will talk to us about the early settlers, and Bishop Pompallier, after introducing himself and his whakapapa.
• Early explorers
• First Catholic Bishop of Aotearoa New Zealand, Jean Baptiste François Pompallier (1802-1871)
Bishop Jean Baptiste François Pompallier headed the French Catholic missionary efforts in New Zealand and arrived in the Hokianga district in 1838. He spent 30 years in New Zealand, returning to France in 1869 and dying there in 1871.
Pompallier was not celebrated in France but New Zealanders remembered him and visited and tidied his grave in Puteaux near Paris.
Efforts to return Pompallier to New Zealand gained momentum in the 1990s. After gaining permission from the Pompallier family and French bishops, his body was disinterred in 2001 and returned to New Zealand in 2002. After being taken on a hikoi around New Zealand he was laid to rest beneath the altar of St Mary’s Church in Motuti in the Hokianga. This is the hikoi in Te Karaka, Northland.